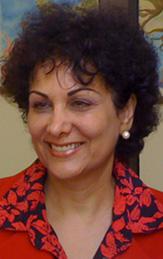 Janet Afary is a native of Iran and a historian of modern Iran. She has an MA in Linguistics from Tehran University and a PhD in History and Near East Studies from the University of Michigan. Afary holds the Mellichamp Chair in Global Religion and Modernity at the University of California Santa Barbara, where she is a Professor of Religious Studies and Feminist Studies.

Previously she taught at the Department of History and the Program in Women’s Studies at Purdue University, where she was appointed a University Faculty Scholar. Her books include: Sexual Politics in Modern Iran (Cambridge UP, 2009); The Iranian Constitutional Revolution: Grassroots Democracy, Social Democracy, and the Origins of Feminism (N. Y.: Columbia UP, 1996); and (with Kevin B. Anderson) Foucault and the Iranian Revolution: Gender and the Seductions of Islamism (University of Chicago Press, 2005). The latter received the Latifeh Yarshater Award for Best Book in Iranian Women’s Studies.

Afary has also been awarded yearlong fellowships from the National Endowment for the Humanities (NEH) and the American Council for Learned Societies (ACLS), and was a Keddie-Balzan Fellow in Iranian History at the Department of History, UCLA (2008-09). She has served as president of the International Society for Iranian Studies (ISIS-MESA), the Association for Middle East Women’s Studies (AMEWS-MESA), and the Coordinating Council for Women in History of the American Historical Association (CCWH-AHA). Her articles have appeared in The Nation, the Guardian, and numerous scholarly journals and edited collections.