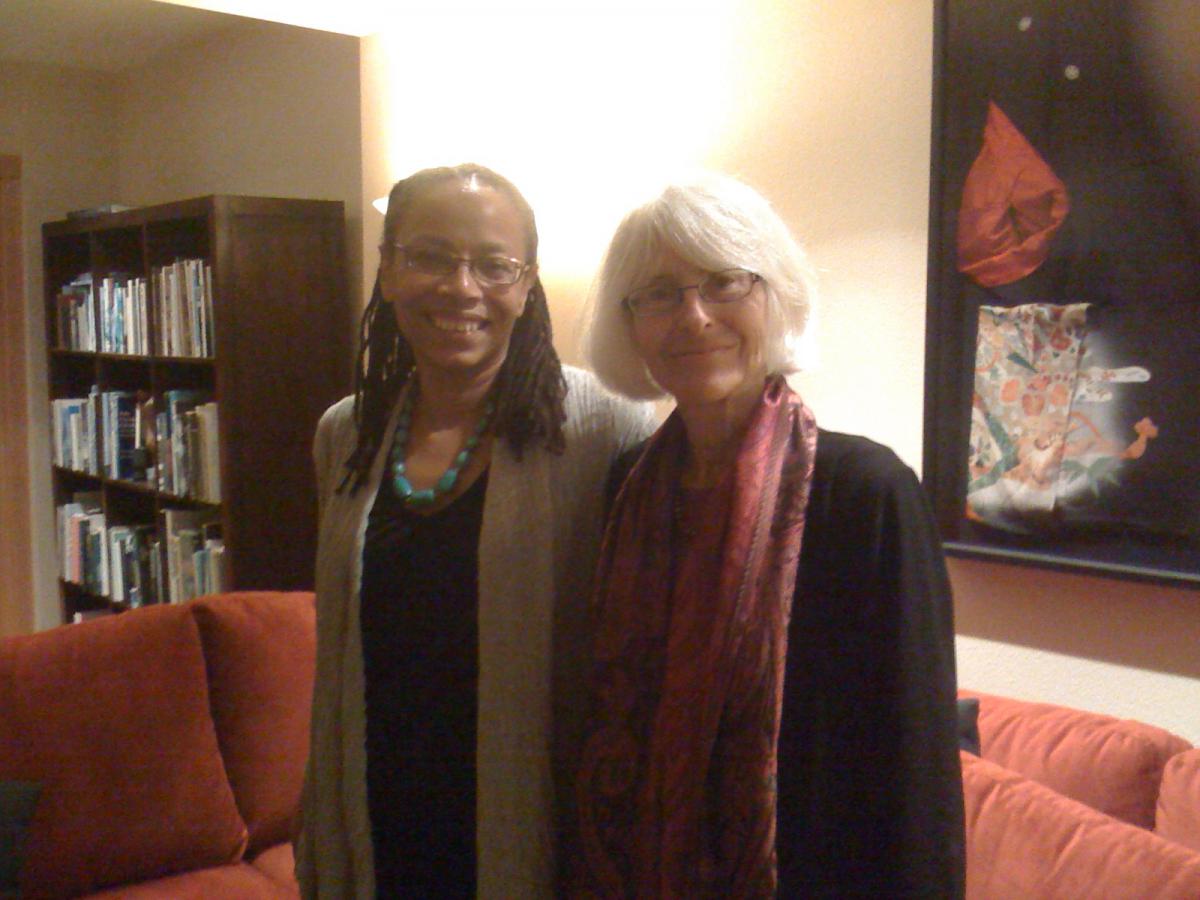 Reflecting the mission of the university for the 21st Century, the Center for Research on Women and Social Justice brings together scholars, professionals, students, advocates, community leaders, and the concerned public to study women, men, and social justice through intellectual dialogue and scholarly research. Its mission is to facilitate individual and collaborative research, develop new curriculum, and disseminate scholarship to wider publics.

The center also puts on a series of lectures and workshop “conversations” that explore the past and future of Feminist Studies, interrogating issues of disciplinarity and interdisciplinarity, and the relationship of the study of women and gender to disability studies, critical race theory and ethnic studies, transnationalism and postcolonial studies, legal studies, queer studies and science studies.  Featured right with Professor Eileen Boris is Dorothy Roberts, who gave the 2011-12 Hull Lecture on Race and the New Biocitizen.  To learn more about the center, visit the website.

Since 2007, the New Sexualities Research Focus Group has highlighted exciting research that explodes sexuality as a discrete category.  To date, New Sexualities at UCSB has redefined sexuality studies as a field in three ways by 1) centralizing race, ethnicity, class, and culture alongside gender and sexual orientation, 2) utilizing domestic and transnational lenses, and 3) examining the role of “the state”, neoliberalism, and human rights in theory and practice. Group members produce new discourses on areas that include the military and the state, new media and technology, pornographies, and religion, among others. In New Sexualities, multidisciplinary and interdisciplinary theoretical engagements and methodological approaches expand the traditional field of sexuality studies. 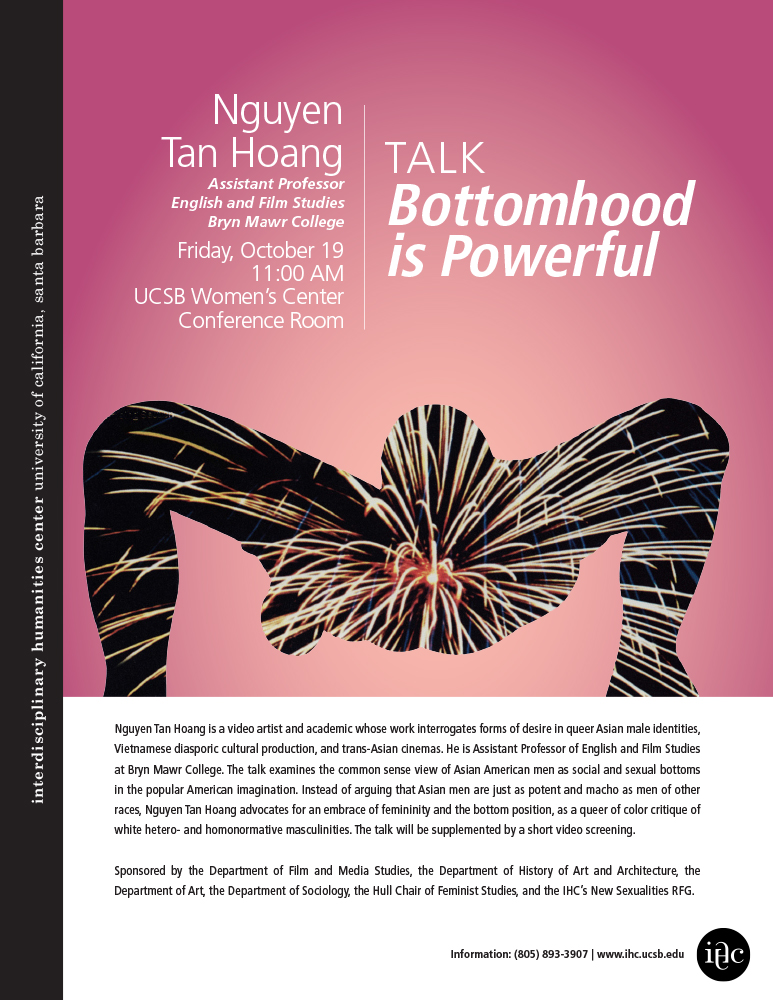 This group provides a support system and network for nearly thirty-five sexuality studies scholars on campus, including a forum for them to share their research and discuss methodological and pedagogical concerns. In addition to fostering collaboration among professors and graduate students across disciplinary boundaries, New Sexualities highlights the wealth of sexualities studies scholarship at UCSB to the campus and wider scholarly community. Faculty and graduate student members come from both the Social Sciences and Humanities, including Feminist Studies, Asian American Studies, Black Studies, English, Film and Media Studies, Education, Sociology, Chican@ Studies, History, East Asian Studies, Comparative Literature, Theater and Dance, Political Science, Global Studies, and Religious Studies.

This year’s theme emphasizes how current work in sexuality studies act as interventions in or answers to the subjugation of knowledges “from below” that tell different stories about sex and politics. In the Fall 2012 quarter, New Sexualities events showcased visiting scholars’ work—as well as the work of professors and graduate students from UCSB— that respond to these issues. Nguyen Tan Hoang, Assistant Professor of English and Film Studies at Bryn Mawr College presented his talk “Bottomhood is Powerful.” The interdisciplinary talk examined the common sense view of Asian American men as social and sexual bottoms in the popular imagination. Rather than upholding traditional views of heroic masculinity, Nguyen Tan Hoang argued for an embrace of femininity and the bottom position, providing a persuasive queer of color critique of hetero- and homonormative masculinities. 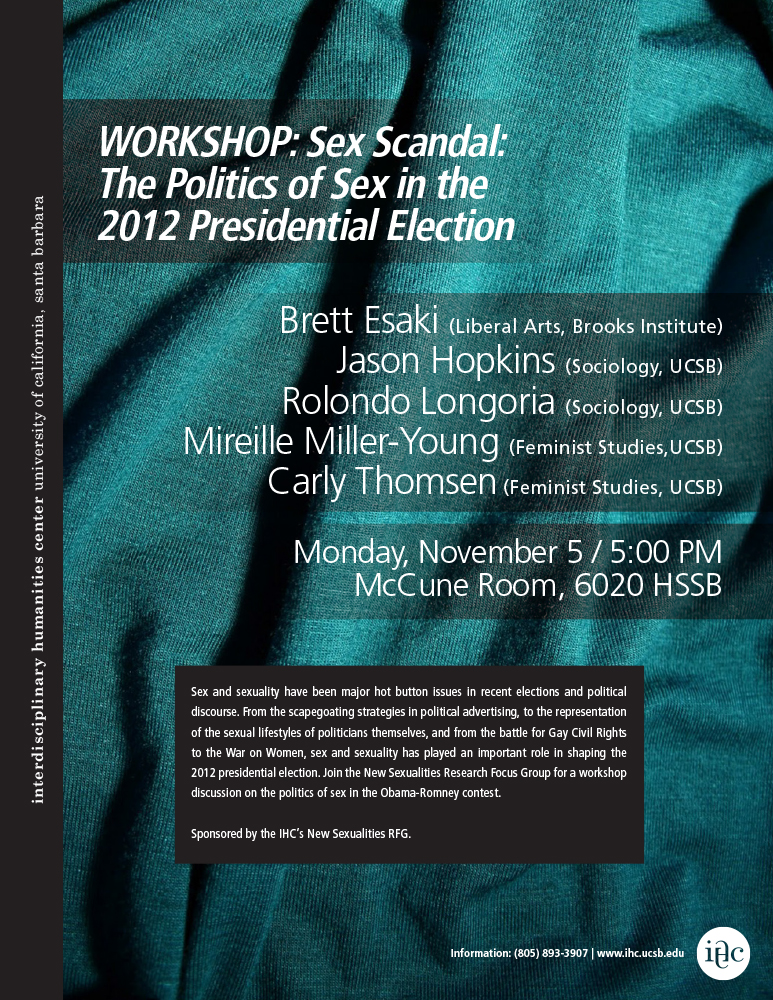 Additionally, the New Sexualities Research Focus Group examined sexual politics in light of the November Presidential election. The workshop entitled “Sex Scandal: The Politics of Sex in 2012 Presidential Election” examined the range of discourses on sexuality leading up to the election deployed simultaneously to motivate voters and to capture media consumers. Going beyondmere popular political talking points to address sexuality as a mechanism of power, graduate students and faculty from UCSB presented on a variety of topics ranging from the scapegoating strategies of political media, the representations of politicians’ sexual lifestyles, Gay Civil rights, and the War on Women. The informal workshop-style presentations allowed for dialogue and increased participation from audience members.

To learn more about New Sexualities, visit the website. 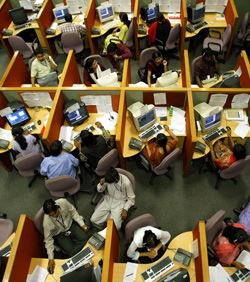 This working group explores the social relations of precarious labor, both formal and informal, from an interdisciplinary, global, and intersectional approach that considers how sociocultural inequalities are and have been magnified and countered during times of financial crises, technological development, and increasing unemployment. Attentive to social contexts that shape, even as they are shaped by, constructs of gender, ethnicity, race, sexuality, ability, age, and citizenship, it considers categorical questions of what counts as work and who counts as a worker from feminist, ethnic, and cultural studies perspectives. We bring to the conversation insights from the humanities sometimes missing from investigations of the informal sector and too often ignored in discussions of the global economic and employment crisis. A website containing scholarly essays and teaching modules will represent the major deliverable. Participants will create a module based on their research area. We envision this website as a living resource that can be added to and will be maintained by UCSB's Center for Research on Women and Social Justice or another appropriate open access site. Our purpose is three-fold: to stimulate theoretical and empirical research, encourage creation of additional modules, and model a practice of scholarship that is both collective and accessible.  Visit the center at the UC Humanities Forums website.