The Dissertation Fellowship program ran from 1991-2009.  The Department of Feminist Studies discontinued the program in the Fall of 2009 when the department welcomed its first graduate cohort.

In Winter 2012 the department hosted seventeen former scholars for a two-day conference titled, The Past, Present, and Future of Feminist Studies.  Academics gathered at UCSB to discuss the trajectory of the field with our faculty and graduate students.
Here is a list of dissertation fellows, fields of study, and their institutional affiliations.

Caribbean, African, and other postcolonial literatures. She is the author of Making Men (1998)

University of Illinois at Urbana-Champaign

Networks of film, media, and technology, with an interest in material cultural productions. Asian American literature and film, and gender theory

Published writing: The Unsettling Subject of Violence in Women’s Lives: Encouraging Notes from the Classroom Front (1999)

Early Chicana feminism, and the possibilities and challenges of women’s transnational organizing around various axes of difference

The history of sexuality and gender; medicine, law, and public health; film and popular culture; and nineteenth century and twentieth-century U.S. history

Women in/and visual culture, engaging in a sustained way the experiences, representations, and cultural production of women of color

University of North Carolina, at Pembroke

The intersections of gender, age, time, and migration

American Studies and Ethnicity; And Race, Gender, and Sexuality in the United States; and the history of California’s Gay and Lesbian Left

The following updates and highlights from dissertation fellows appeared in either past newsletters or on the department website.

The year I spent in residence at UCSB, from 2004-05, was a turning point in a long journey toward the Ph.D. By the end, I had a nearcompleted draft of the thesis. This was due to three key elements the fellowship provided simultaneously: time, money, and mentorship. I earned a doctorate from the Department of Social and Cultural Anthropology at Stanford University in August 2007. Equally important to the area's infamous beauty and the fellowship's generous accommodations was the authentic feminist solidarity from those at Women's Studies. The faculty, staff and students were a joy. As a result, my professional and personal network expanded considerably, benefiting too from a small, robust community of dissertation and postdoctoral fellows and from sojourns to the Department of Chicana/o Studies. I strengthened my research and writing skills, gained more self-confidence as a Chicana feminist scholar, and raised my standards of scholarship and treatment in the academic arena. I left UCSB feeling there could be a university for me where growth, healthy collegial relationships, and even happiness might be found along with rigorous, intellectual endeavor. The Women's Studies Dissertation Fellowship at UCSB was critical the completion of my doctorate and, even, to my new position as a Mellon Postdoctoral Fellow in the Humanities at the University of California at Berkeley. 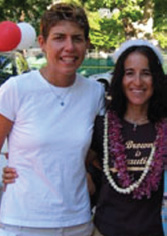 I had the good fortune of being a Women's Studies Dissertation Fellow in 2004-05 along with Francisca James Hernández. Francisca and I hit it off immediately and coalesced with a great group of pre and postdocs at UCSB that year. The faculty in Women's Studies was amazingly helpful and supportive in assisting me with my teaching and enabling me to complete and defend my dissertation. I moved from UCSB into a postdoctoral fellowship in Women's Studies at the University of Limerick, Ireland. Since much of my research is about Hawai'i, it was fascinating to be in another colonized island nation where issues of colonialism, race and indigeneity are also hot issues. Being in Europe was invaluable in providing me access to alternate academic models and refreshingly non-American perspectives. From Ireland, I moved to Syracuse University (New York) where I served last year as one of eight new Postdoctoral Faculty Fellows in the Humanities. My departmental homes were Women's Studies and Native American Studies, both with outstanding faculty and growing programs. I returned to California this summer, coming full circle back to Women's Studies at UCSB, this time as an Affiliated Research Scholar. This position will enable me the time and research support to complete a book I have under contract with University of Hawai'i Press. The book, Haoles in Hawai'i, is part of an upcoming series on race and ethnicity in Hawai'i (haole is a Hawaiian word commonly understood as white people or whiteness). 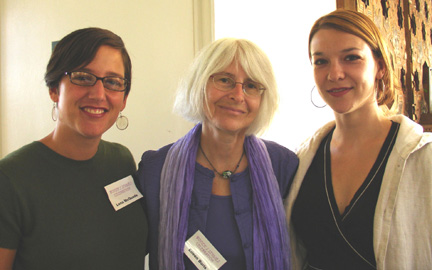 My dissertation, "Troubling Reproduction: Sexuality, Race, and Colonialism in New Mexico, 1919-1960," is an interdisciplinary analysis of sexuality and reproduction in the U.S./ Mexico border state of New Mexico. More specifically, this project details how reproductive health policies and education are inextricably linked, not only to ideologies of race, gender, and national belonging, but also to their material effects evidenced in institutionalized racism, colonized health practices, and racially and economically stratified reproductive health. Utilizing feminist and critical race theory coupled with Foucault's theory of biopolitics, my dissertation traces diverse women's roles in the history of reproductive health and education in a region frequently overlooked in reproductive health histories. Chapters of my dissertation focus on: relationships between Latina parteras (midwives) and white, female public health nurses; medical researcher Sophie D. Aberle's work chronicling infant and maternal mortality in New Mexico's indigenous Pueblos; visual representations of racialized reproductive bodies; and the Santa Fe Maternal Health Center and modern birth control activism and resistance. Next year, I am thrilled to be joining the faculty in the Women's and Gender Studies Department at Sonoma State University as an assistant professor.

My dissertation, "American Cultural Fantasies: Racial Violence, Disenfranchisement and the Ethics of Recognition in the Post-Civil Rights Era," investigates media, public and state representations of four contemporary instances of racial violence and disenfranchisement. It demonstrates how racialized and gendered American cultural fantasies are central to the production of public consent for contemporary state and institutional acts of violence, impoverishment or expendability. I define cultural fantasies as dominant race and gender constructions that structure public intelligibilities, economies of affect, frames of reception and interpretation. I trace dominant assumptions about Haitians, Arabs, Mexican immigrants and African Americans and examine the ways cultural fantasies often make inequality and injustice appear natural, normal and necessary. Each case study reveals narratives of cultural resistance, political dissent, and organizing efforts that seek to end dehumanizing practices. The dissertation chronicles counter-hegemonic discourses and practices based in communities of color as a way to posit contemporary models of ethical recognition and political responsibility.

My dissertation, Imagining Alliance: Queer Anti-Imperialism & Race in California, 1966-1989, examines how lesbian, gay, bisexual and transgender activists adapted anti-imperialist politics throughout the late Cold War, and how these activists used anti-imperialism to craft more liberated sexual identities, build activist alliances, and establish queer community. I historicize my study between the founding of the Black Panther Party (1966) and the defeat of the Nicaraguan Revolution at the close of the Cold War (1989). Through these unexpected markers, I reveal the importance of racial militancy, internationalism, and national liberation for U.S. sexual politics. I argue that through anti-imperialism, queer radicals embraced a politics of alliance and a discourse of lesbian and gay space. However, I also argue these two impulses stood in contradiction. Queer space carried implicit ties to the privileges of the U.S. nation, whiteness, and capital. Meanwhile, alliance rested on solidarity with national liberation projects that often rejected queer identities. I examine activists¹ responses to these contradictions, and locate the central role of lesbian feminists of color in critiquing both gay and straight nationalisms and sustaining anti-imperialist commitment. Finally, I argue for the importance of queer politics in reshaping the left as a whole, in particular through queer radicals participation in socialist-feminist and international solidarity activism during the 1970s and 1980s.

I am earning my PhD from the Department of American Studies & Ethnicity at the University of Southern California, and earned my BA at Harvard College. Prior to graduate school, I worked in community-based campaigns for racial justice in California public schools, as well as on campaigns for gender equity, immigrant rights, and other social justice issues. I have been an organizer and researcher for the Center for Third World Organizing (CTWO), the Women & Organizing Documentation Project, and Californians for Justice (CFJ), and I remained committed to activist work. I am honored to be a Dissertation Scholar in UCSB's Department of Feminist Studies!

My current research explores the mechanisms by which ideas and practices of gender and violence are produced and reproduced. In my dissertation, "Violence Matters: Constructions of Gender and Violence in Mainstream News Media and Social Movement Actors' Accounts of Murder," I focus on one such means of (re)production: social narratives about acts of violence. This work brings together the disparate subfields of Gender and Sexuality, Criminology, Social Movements, Media Studies, and Post-Structuralist Theory to trace the ways in which a particular set of ideas and practices of gender and violence were produced in the United States between 1990 and 2005. Using a unique dataset, I examine how these narratives shaped the dominant gender system as well as greatly influenced the criminal justice system's attempts at violence prevention. To do this investigation, I collected and analyzed all the available texts produced by the mainstream news media and transgender activist groups about the murder of transgender people in the U.S. between 1990 and 2005-a total of more than 7,000 individual news articles, press releases, flyers, and activist websites about 232 homicides. I supplemented these texts with an examination of a number of other sources, including documents about the process of implementing anti-hate crime legislation. This work offers a variety of contributions to the literatures I engage with, including: how increased visibility of gender minorities can cause significant shifts in the gender system over time; the unintended consequences of what I term "identity-based anti-violence activism"; how beliefs about sexuality are central to acts of gender violence; and the ways in which narratives about violence shape attempts at violence prevention.

I am a Ph.D. Candidate in Sociology at the University of California, Berkeley, completing my dissertation under the direction of Professors Barrie Thorne (co-chair), Dawne Moon (co-chair), and Wendy Brown (Political Science), with a Designated Emphasis in Women, Gender, and Sexuality. I have several articles in press right now, including "Vulnerable Subjecthood: The Risks and Benefits of the Struggle for Hate Crime Legislation," in press at The Berkeley Journal of Sociology, "Becoming Knowably Gendered: The Production of Transgender Possibilities and Constraints in the Mass and Alternative Press from 1990-2005 in the United States," forthcoming in Transgender Identities: Towards a Social Analysis of Gender Diversity, edited by Dr. Sally Hines and Dr. Tam Sanger, "Where the Women Aren't: Gender Differences in the Use of LGBT Resources on College Campuses," forthcoming in The Journal of LGBT Youth, and "On Writing Public Sociology: Accountability Through Accessibility, Dialogue, and Relevance," co-authored with fellow Ph.D. Candidate Damon Mayrl and soon to be available in The Handbook of Public Sociology edited by Dr. Vincent Jefferies. I am honored to be a fellow in residence in the Feminist Studies Department at the University of California, Santa Barbara.